A lovely bloke and great pictures. Rebellion is one of my favourite all ages indoor festival with 7 stages (including the Rebellion Introducing Stage), over 350 bands, art exhibition and tatooist it caters for everyone. But what makes this festival truly special is the Rebellion team/family that runs it and the people that come.

For me it’s the perfect place to meet up with friends from all over the world, listen to good music and make some new friends.

Here some pics of the many many people I met. Photo by Simon Balaam
Just got back from a great weekend in Manchester where I met up with Carol, the Pete’s and Upender. 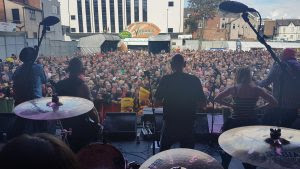 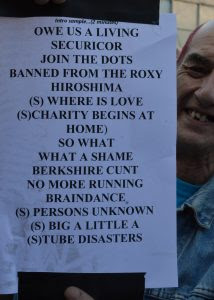 I’m really pleased to announce that I’ll be back with Slice Of Life at Rebellion next year . Thank you all for supporting us and coming to see us this year. It was great to see you all. Check out the photos taken by Simon Balaam.

A special set celebrating 40 years shouting down a microphone and remembering some of the very special people we lost this year.

Thank you all so much for your ongoing support over the years. Even if you were not there on the day you still were very much a part of it.

It’s great to see all the footage and many photos that have been taken.